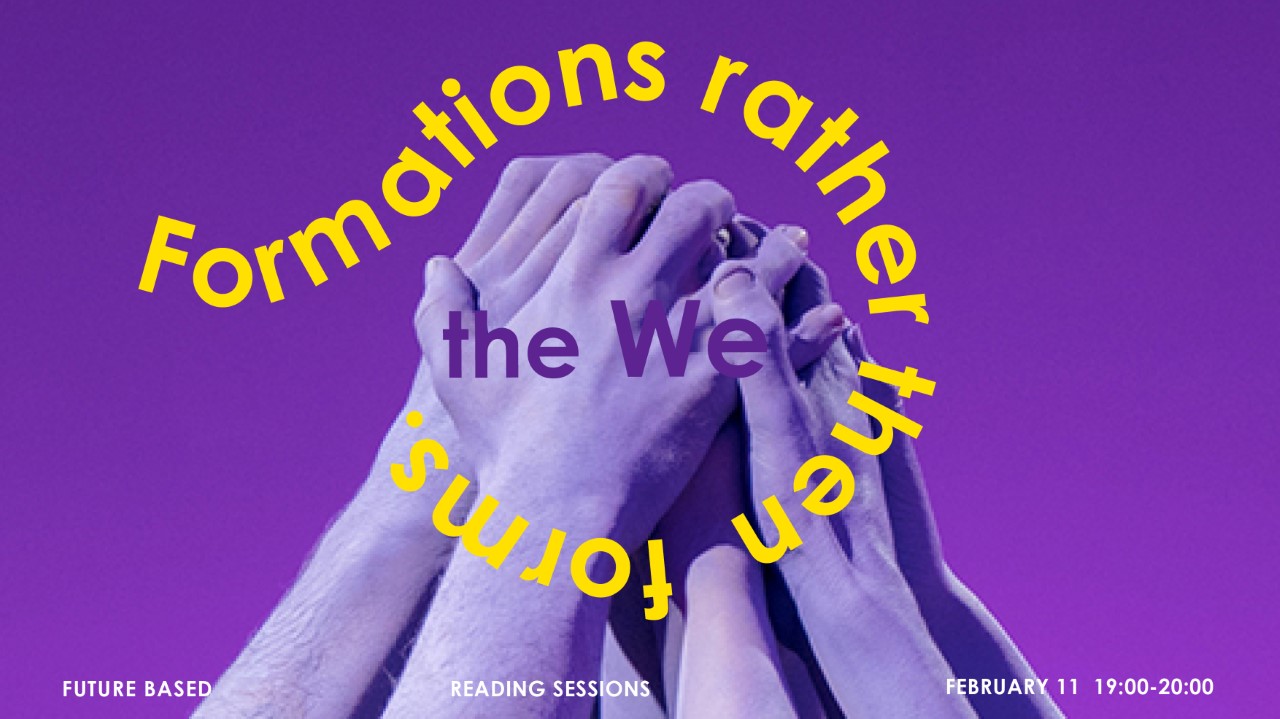 Formations Rather than Forms: The We

Exploring the choreographies of the human position

Join Cindy Moorman in a guest series of Reading Sessions at Future Based. Immerse yourself in a collaborative investigation of the possibility of fluid connections in a world that often demands a definitive composition. Through philosophical and cultural texts, we investigate the movement and position of the masses, the individual, the collective and the other. Together we ask: Where am I among the masses? How can the We stay fluid and open without loosing its safe haven? How can the Other(s) be an extension instead of an objectifier? And which role do I play within the formations?

Participation if free of charge.

Cindy is known for her scripted gatherings that explore the dynamics of collectivity by creating a temporary shared space. The Reading Sessions are a continuation of her previous online gatherings. By turning reading into a communal experience, her online readings aim to create an interstice where the participants can connect through the exchange of ideas and disconnect from the seduction of given rhythms.

Step out of the conga line of daily life, and join the first session on the 11th of February.

Reading Sessions: Formations Rather than Forms is initiated and curated by Cindy Moorman.

The work of visual artist Cindy Moorman is characterized as an ongoing research into human relationships. How do I relate to the Other(s)? What does it take to ‘belong’? These are questions that play a role in her work. Moorman is best known for her carefully staged performances that she has performed by various groups; from acrobats to dancers to choirs. The concept and plans behind this are translated in intriguing scenarios; drawings, paintings, photographs and clothing. Moorman studied at the School of the Arts in Arnhem (1999-2003) and the Master’s program of the Sint Joost in Breda (2003-2005).Her work has been exhibited in renown places as Museum Voorlinden in Wassenaar, the Van Abbemuseum in Eindhoven, the Museum of Modern Art in Arnhem and the Stedelijk Museum Bureau Amsterdam. And is included in various private and museum collections, including the collection of the Van Abbeuseum in Eindhoven.In 2018, Moorman’s oeuvre was rewarded with the Stipend Established Artists. She is currently working on a new work for an exhibition in Kunstverein Ahlen (DE) and an artist’s book about her work.

We use cookies and sometimes third party services such as Facebook adds. But since we never have analyzed anything, we have forgotten the password for Google adds, and it might even be that the codes are not installed in the correct way (still have to check), you don't have to worry we are tracking you. We don't even know how. However, just to be sure: this website uses cookies up to 14 days (instead of 30). Ok
Go to Top