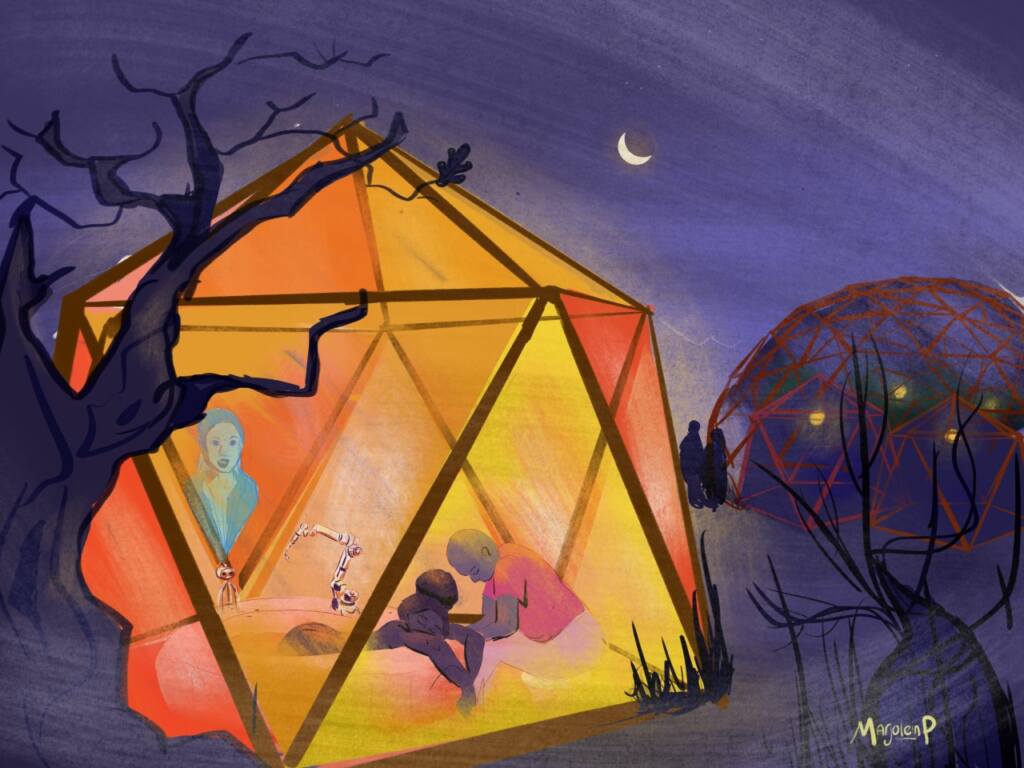 A slow, bellowing roar broke the early morning in half. Birds dispersed agitated from the glass domed greenhouse where agri-robots dutifully continued to water, cut, plant and harvest the crops as if this was just another day. But it wasn’t. Something was about to happen that hadn’t happened for years.

A short, speculative story on the future of birth by Marjolein Pijnappels

Awakened to the primal sound Seph, Bästa Community’s teacher and designated genetic engineer, rolled over to his side in the sleep pod he shared with his partners Lure and Kwame and whispered excitedly: ‘A new Node is being added to the network.’ Kwame didn’t stir and Lure yawned and huddled deeper under the covers. The winters here remained cold as ever. To save the sparse sun-generated energy every community member (or ‘Node’ as they preferred to call themselves) slept under layers of woollen duvets sourced from a local population of cold-adapted alpaca-llama hybrids. ‘Would you ever consider…?’ Seph mused aloud but Lure was already fast asleep, their black braids scarcely visible from under the blankets. But Seph already knew what Lure would’ve said. ‘The children of the community belong with us all and I don’t feel the need to inject my own DNA into the network, thank you very much.’

A few pods away Léone concentrated on deep inhales and extended exhales to reduce mental activity and activate oxytocin production. Like waves the contractions rolled through her body while she leaned over the bath’s edge. ‘It’s going great’, her sister Mir said softly, firmly keeping pressure on her sister’s lower back with her hands. The holographic projection of the on-call midwife-doctor present in the nearest Procreation Center watched on in calm silence. Léone glanced through her eyelashes to catch the soothing reds and golds visualized on the pod’s smooth walls around her – real-time feedback of the rising analgesic hormone levels produced by her own body. She pushed a tiny button to activate an underwater vibrating device meant to stimulate orgasms to reduce pain further and even make birth pleasurable.

This birth was a community effort. Its Nodes had rallied to care for Léone since well over a year before conception, optimizing her mental, spiritual, and physical condition, supporting her throughout the pregnancy, the sickness, the pelvic instability and planning to lovingly care for the ‘dyad’ after birth. Agri-communities considered pregnant people as one ‘superorganism’, two separate individuals that were also part of each other. They remained a true dyad after birth, metabolically connected through bodyfeeding, until well after a child’s third birthday when parent and child became Nodes, individually connected to the whole community. The interconnected, dependent dyad was the cornerstone of the community, the root of a connected web of emphatic individuals within the larger surrounding ecotope.

Ever since the Red Uprising in 2022 following the fall-out of the Russian-Ukrainian war, mother-led revolutions worldwide overthrew the remnants of nigh all war-hungry, consumer oriented, capitalistic systems. Egalitarian agri-communities like these had fiercely resisted conservative ‘Repopulate the Earth’ propaganda and instead vowed to recreate societies gently merging technology with nature in a sustainable, nurturing way. Many hesitated to bring children into the world now it had partially collapsed, but those that did where respected for their decision to procreate the human species and were unconditionally supported during their journey. The few children that were born were cared for and raised by all as their own.

Seph couldn’t sleep anymore now he was aware of the birth taking place. It was the first in nearly six years. He rose from his sleep pod and crossed the solar fields shimmering in the early winter’s light. He found Lica, the 104-year-old wise woman who was looked upon as the informal leader of their self-sustained community, sitting with closed eyes in a rocking chair next to the greenhouse, softly humming to herself and producing whiffs of air clouds in the process. Silently he joined her meditation, crouching to the icy ground while activating the sensors implanted in his fingertips. Touching the ground, he felt the tiniest vibrations that told him the wild alpaca hybrids roamed some seven kilometres upwind and, in his mind, grazed with them for a while. Since the invention of the sensors by one of the engineers surviving the fall-out, its application had moved well beyond agricultural data collection. Originally meant to gather data on soil and root development it turned out the sensors could also be used to track all earth-based life forms. Each species and even each individual had a unique vibrational footprint based on gait, and Nodes frequently used it to keep track of each other, friends, enemies and wildlife.

At mid-day the community had gathered around Seph and the elder woman, covering themselves in insulating silica aerogel lined coats and woollen blankets, sharing warm soup and hot drinks, laughing, and talking. Someone projected a holographic movie about a beetle  . A young child started a song in a brittle, little voice and all went quiet for a while, the older folks contemplating life in this strange new world. Léone’s sister than stepped out from the pod, whose rich hues of reddish gold shining through the outer shell had made way for cooler, softer shades of purple and pink. ‘The baby is born’, she declared. ‘A new Node is added to our network, the dyad is beautiful and in good health.’ The crowd cheered. That was all they needed to know.

When Lica went to pay her respects to the dyad, she brought lots of wholesome, ready-to-eat foods. On entering the pod, she hugged them both warmly and admired the tiny face, lips, and fingers. She looked at Léone and felt a change. Something deep and sad. ‘The baby is absolutely divine, Léo’, she said warmly. ‘But are you okay?’ Léone held the child close as she tried to feel and articulate their combined needs as she’d been preparing to do for years. Finally with a scrunched-up face, eyes locked on the pod’s sliding glass doors, she managed to say: ‘Is it completely perverse of me that I need to break this dyad already after six days? The pod’s walls are falling into me. I don’t seem to know where I end, and the baby begins. All the feeds, the short sleeps. It’s… hard.’ Léone closed her eyes. ‘It is wicked of me. I know it is. With the whole community rooting for me… I am being selfish.’ Lica softly touched the mother’s chin. ‘Look at me Léo. In this confusing entanglement of bodies that we call pregnancy and birth, nothing is abnormal. What you are feeling is valid. Go take a walk.’ Lica held out her arms and a stunned Léone transferred the sleeping infant instantly to the white-braided elder who started humming a tune. ‘Go’, she gestured to the sliding doors without looking up.

Stumbling a little Léo got up, slid into her wool-leather boots and coat and pressed the sliding door button. Bitter cold air bumped on her skin, taking her breath away. She stared over the empty barley fields, saw the solar panels flickering in the distance and spotted some of her loved ones, Seph, Lucila, and Lin, gathered around a new model of hydrogen powered unicar, apparently admiring the fluid design. When Seph spotted the movement coming from the pod he turned to her and moved his hand across his heart in a hugging gesture. Léo stepped over the threshold into the winter day and drew a deep breath. It seemed like the whole ecotope exhaled with her.

Future Based2022-06-02T14:47:21+02:00
Page load link
We use cookies and sometimes third party services such as Facebook adds. But since we never have analyzed anything, we have forgotten the password for Google adds, and it might even be that the codes are not installed in the correct way (still have to check), you don't have to worry we are tracking you. We don't even know how. However, just to be sure: this website uses cookies up to 14 days (instead of 30). Ok
Go to Top