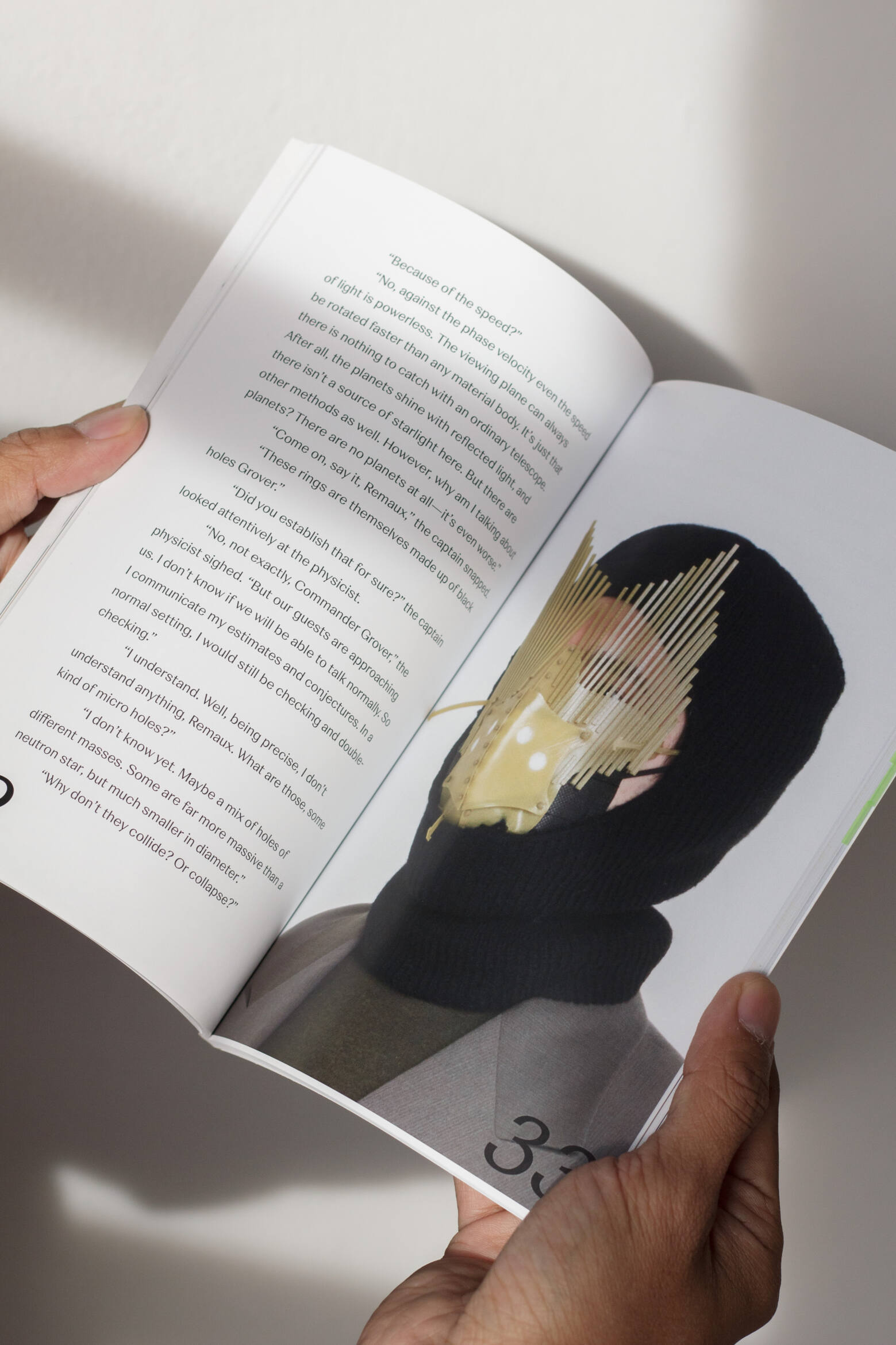 Outside the window, a mask is not an unusual sight. I am stuck at home, scrolling, when I stumble upon an Instagram post 1 of a woman wearing an elaborated red mask, 105 likes, organic looking, 3D printed, lush… It is #covidcouture, an ode to viral protection times. The description reads:

LMX ULTD is still a mystery to me. Since May, I have exchanged a few direct messages with them, though purposely avoiding any conceptual discussions of the project. Instead, I am now diving in, performatively, intellectually, bare skin to the paper, nose to the pre-installed filter.

This review is written in the Omicron era, the latest of the Greek letter covid variants.

LMX ULTD Lookbook appears to be a classic paperback catalog with a glossy cover and 50 something pages. The content, however, adds a new layer to the cryptic nature of the project. It features an unauthorized, though original translation, of The Black Calculator, a sci-fi novella by Fedor Berezin.

He is the former Deputy Minister of the Donetsk People’s Republic (an unrecognized quasi-state), and a prolific historical fiction and sci-fi writer. Bruce Sterling, one of the founders of the cyberpunk movement, once invited him to contribute to Twelve Tomorrows (The MIT Press), though the story was pulled last minute due to Berezin’s status as a warlord, and presence in an international financial sanctions list 2 . He has been called the Russian Tom Clancy. He reads Neal Stephenson. Today, Benzin who once claimed “I have found myself in an alternative reality,”3 still lives in the Ukraine-separatist state. 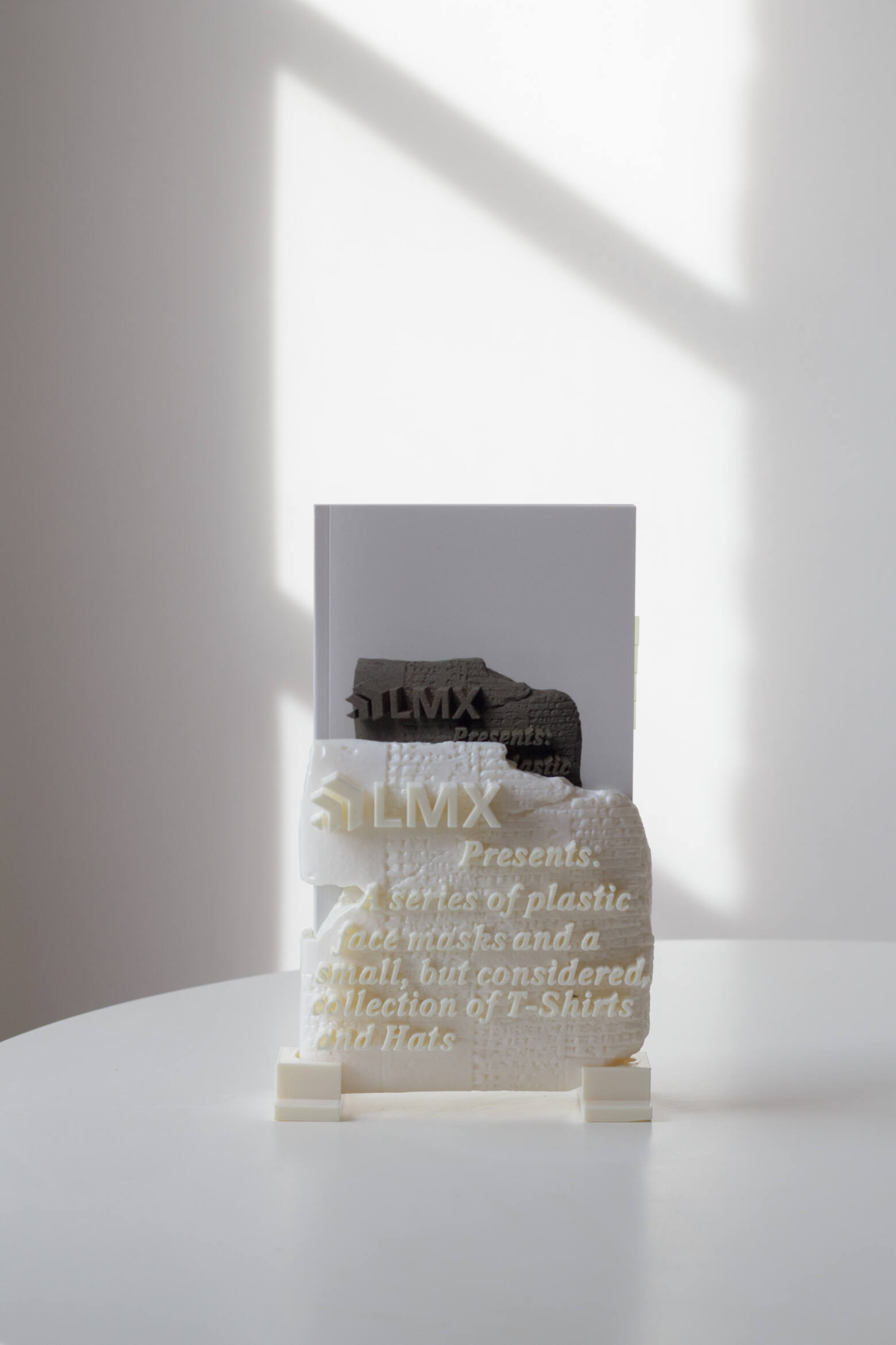 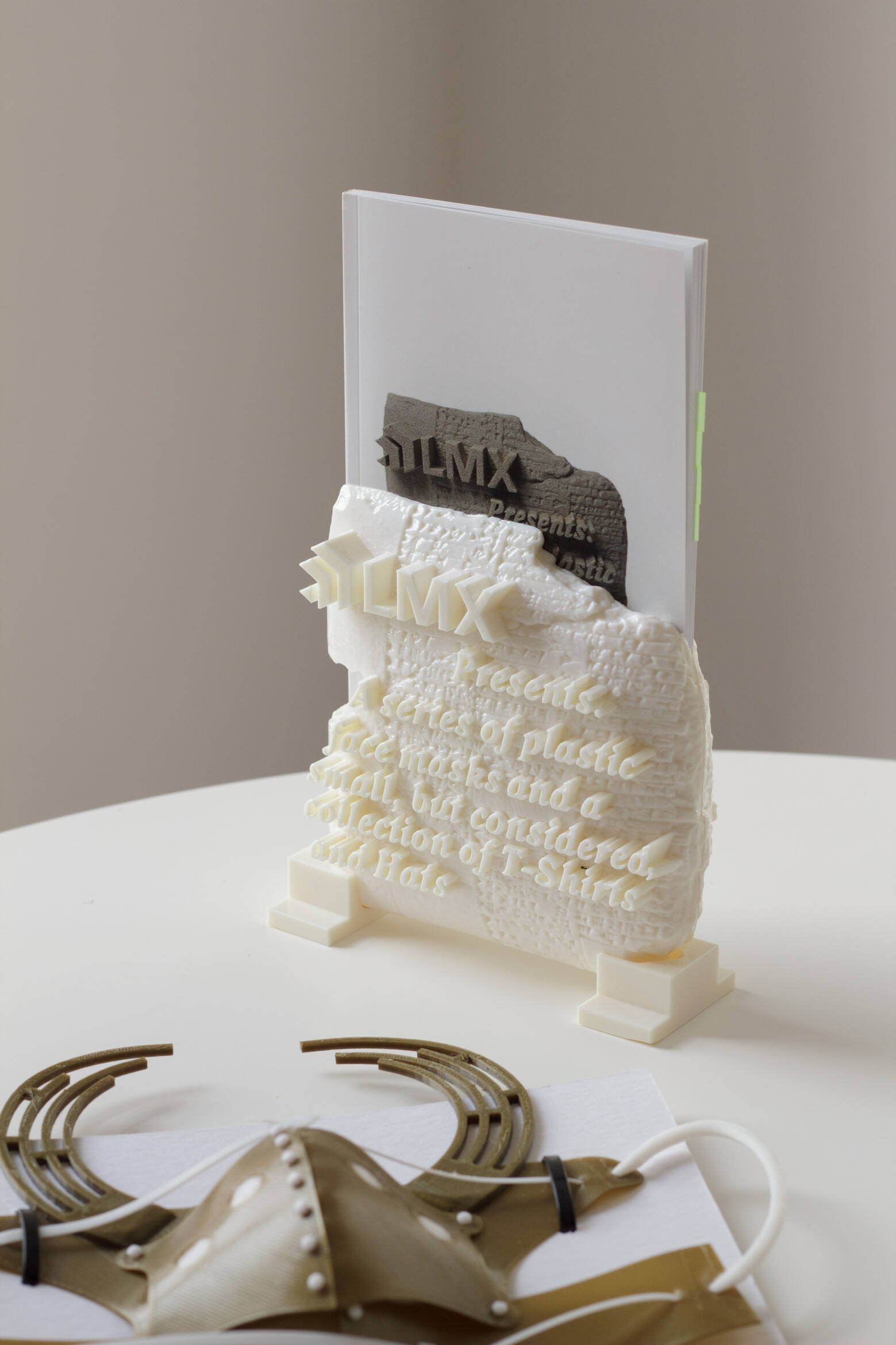 The Black Calculator narrates an encounter between two intergalactic species: one represented by a human crew on its way to Caduceus System, and the other an unspecified alien race whose members are overseeing a strange experiment known as the Black Calculator. The humans’ ship is named Ivan Efremov (inspired by the eponymous Soviet paleontologist, sci-fi writer, and founder of “taphonomy” or the study of how organisms become fossilized). Grover, the captain of the crew, is woken up from a dormant state by Mercurius, a robot or AI entity in charge of navigation. The ship has veered dramatically from its original trajectory due to an unexplainable decision made by Mercurius, who claims it acted this way in order to avoid a ‘black hole.’ According to all data, Mercurius’ explanation doesn’t add up.

As the story develops, a series of LMX ULTD masks and t-shirts (whose fabrics are soaked in a synthetic blend of human digestive enzymes) appear increasingly, intermittently floating among bodies of text. A series of symbols appear, QR codes, chemical diagrams.

We then learn that the alien race is channeling its voice through the face and vocal cords of a, now, dead member of the crew. Upon a brief dialogue, the aliens acknowledge the mysterious human trait of intuition, which was the magnetic pull that brought them, via their ‘faulty’ AI, to this intergalactic interaction. As the bearers of the Black Calculator, the entities promise humans access to the code that operates the universe. 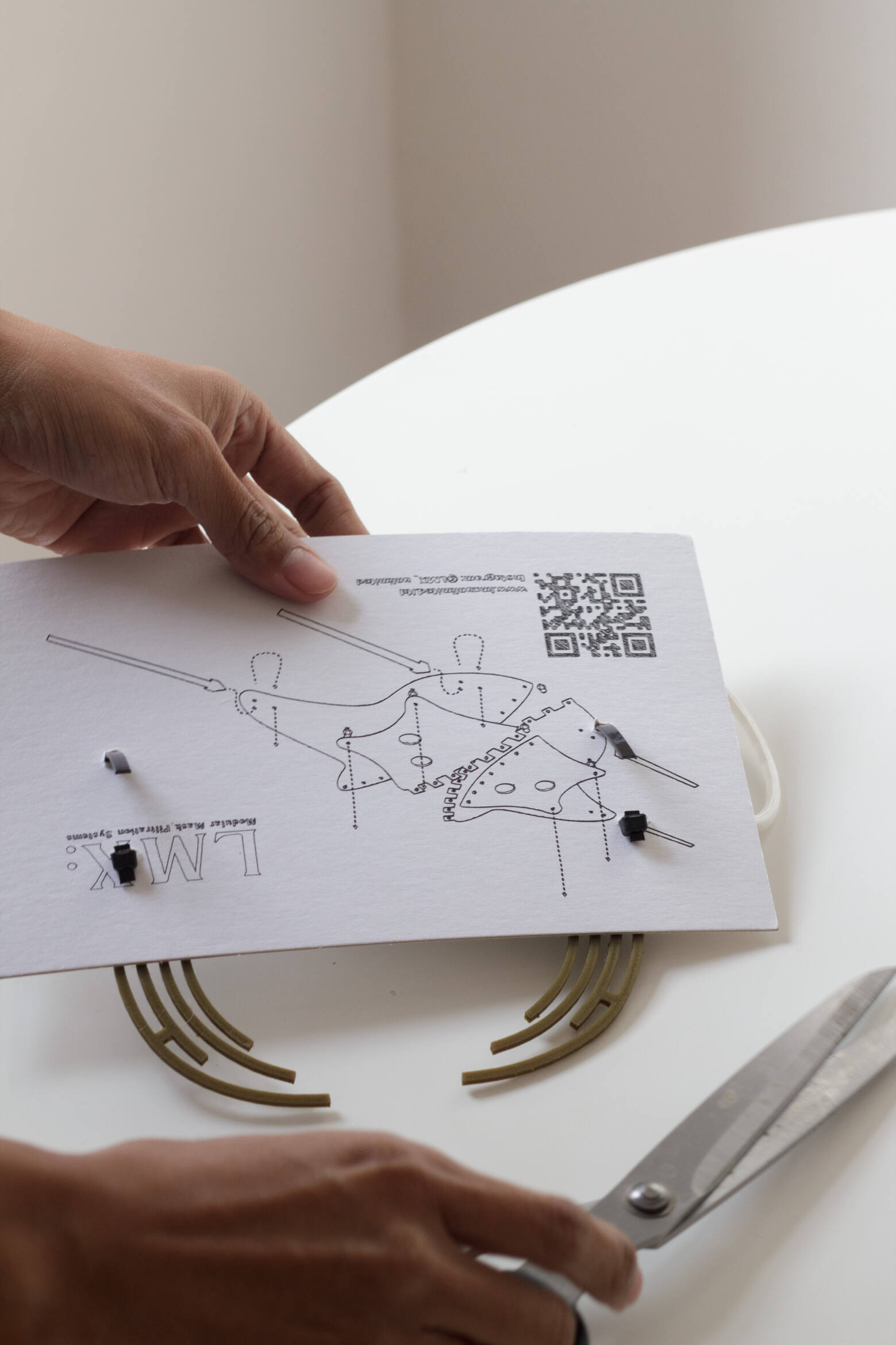 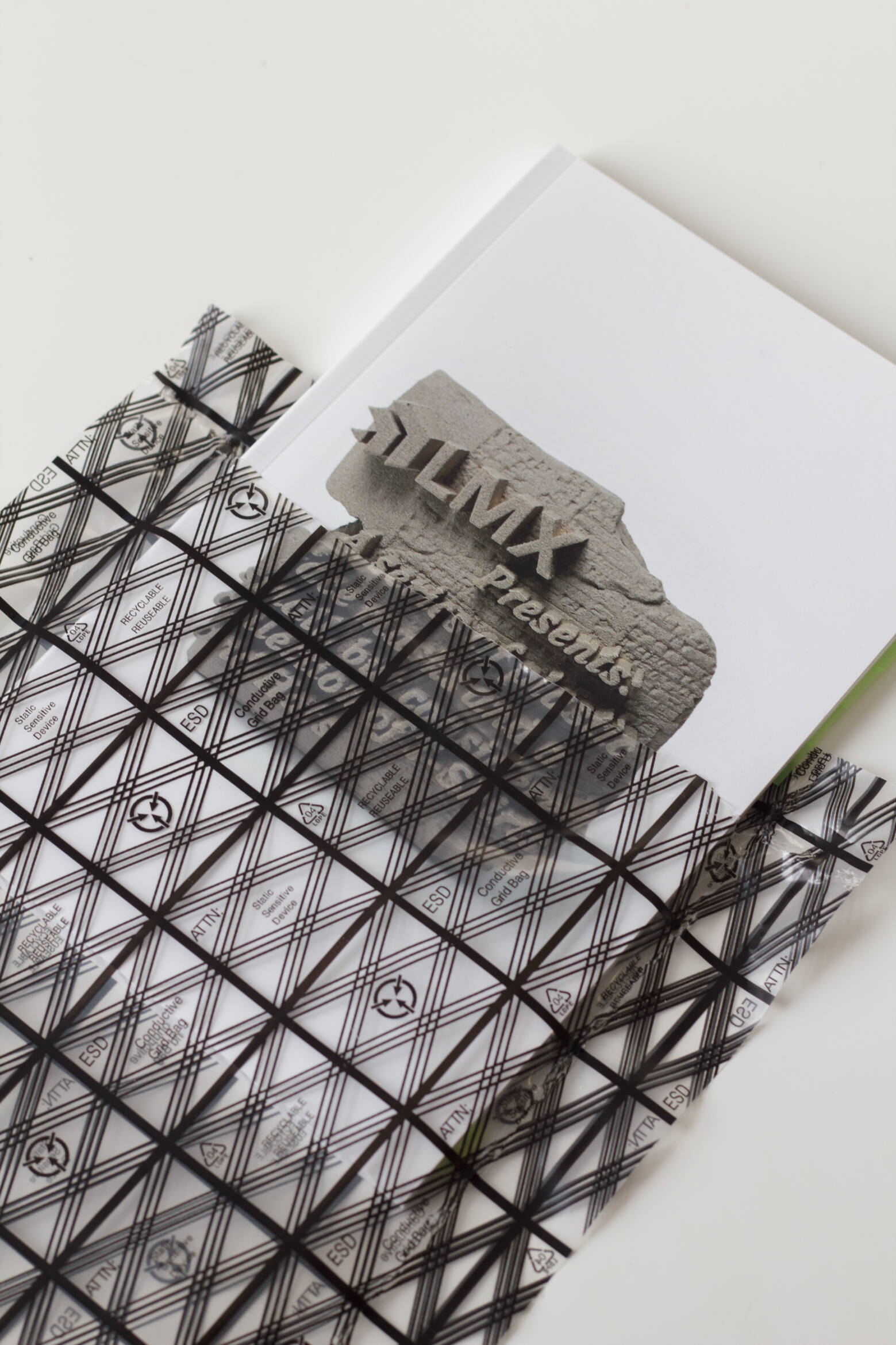 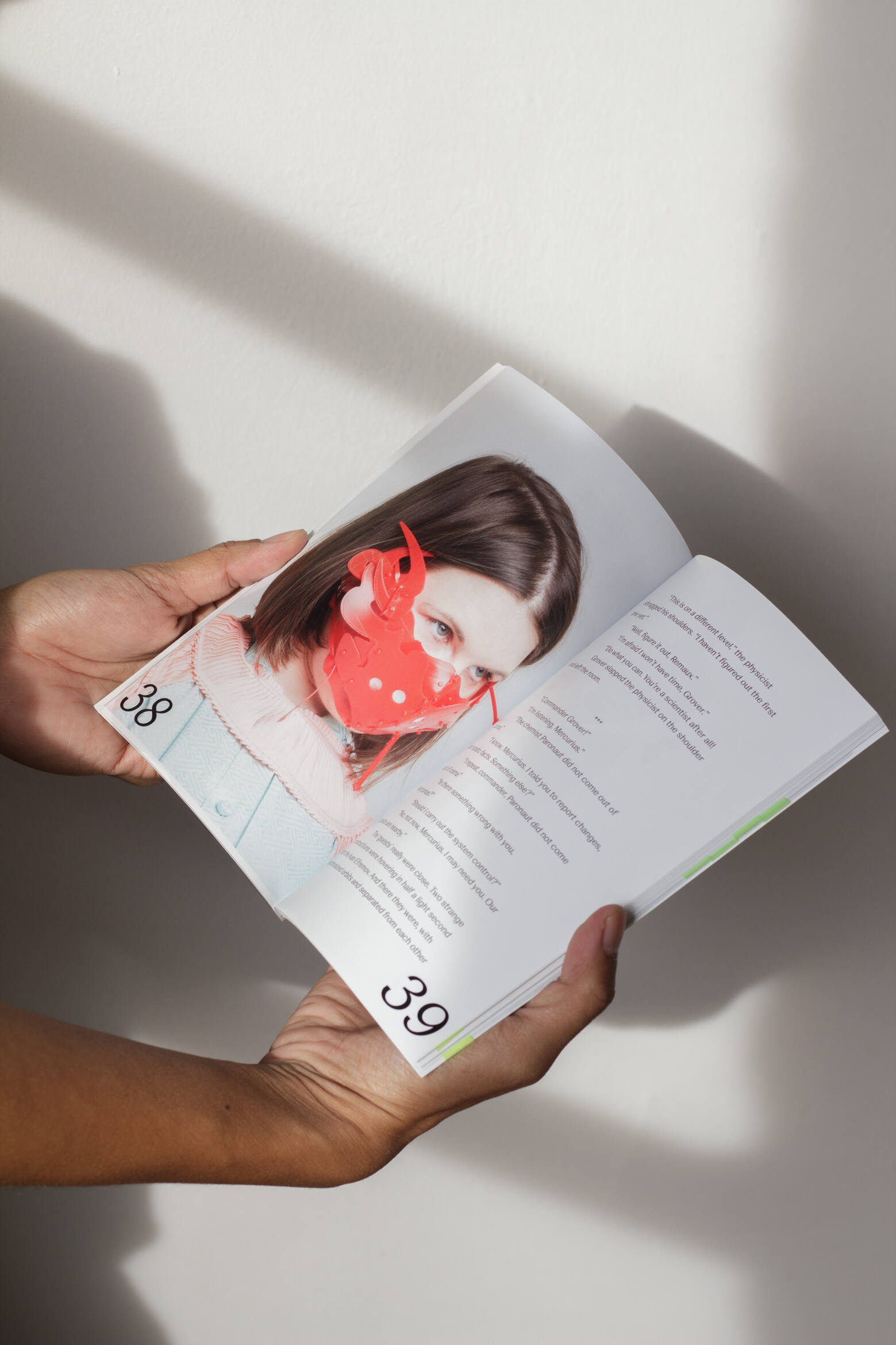 Postscript:
In the century of rampant advances in biotechnology and metaverse avatars, to disguise or to LARP (Live Action Role Play) is no longer a mere entertainment activity but rather a legitimate or even essential tool we may adopt to navigate a cloud(y) reality. To mask oneself is to perform a barrier between entities (virus/host)(known/unknown)(human/nonhuman), but also between our public construct and our private fantasies. With some narrative intention and intuition, this mask, this artifact of unusual provenance, becomes a prop, a vehicle for SF (science fiction, speculative fabulation, string figures, so far4). As I try the Ivan Efremov mask, a rain of attitudes threaten to weird my sense of selfhood, I feel alien, incognito, remote, anti-social, parasitic, para-garde.

Only a question remains: for how long does one wear this? 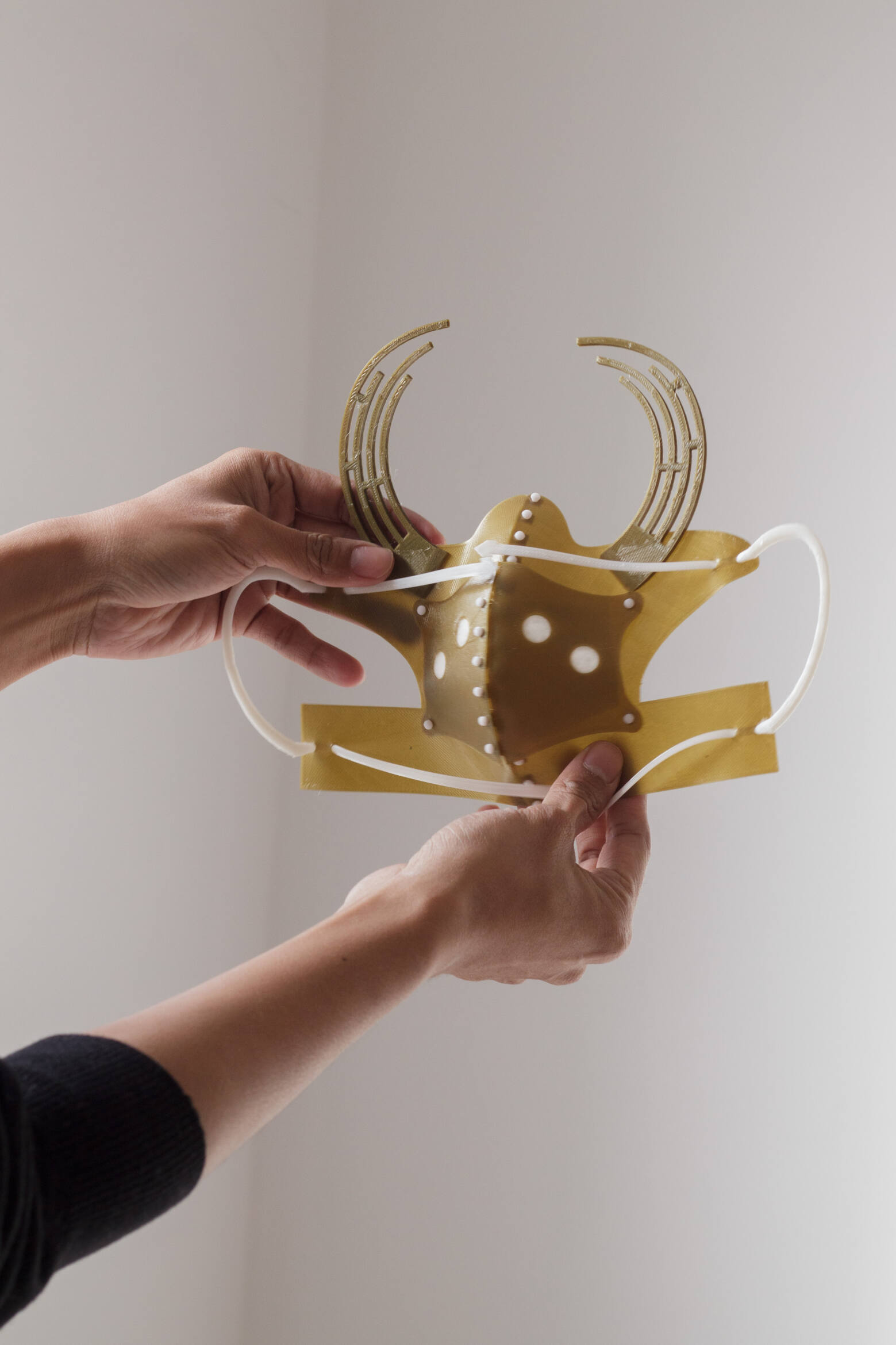 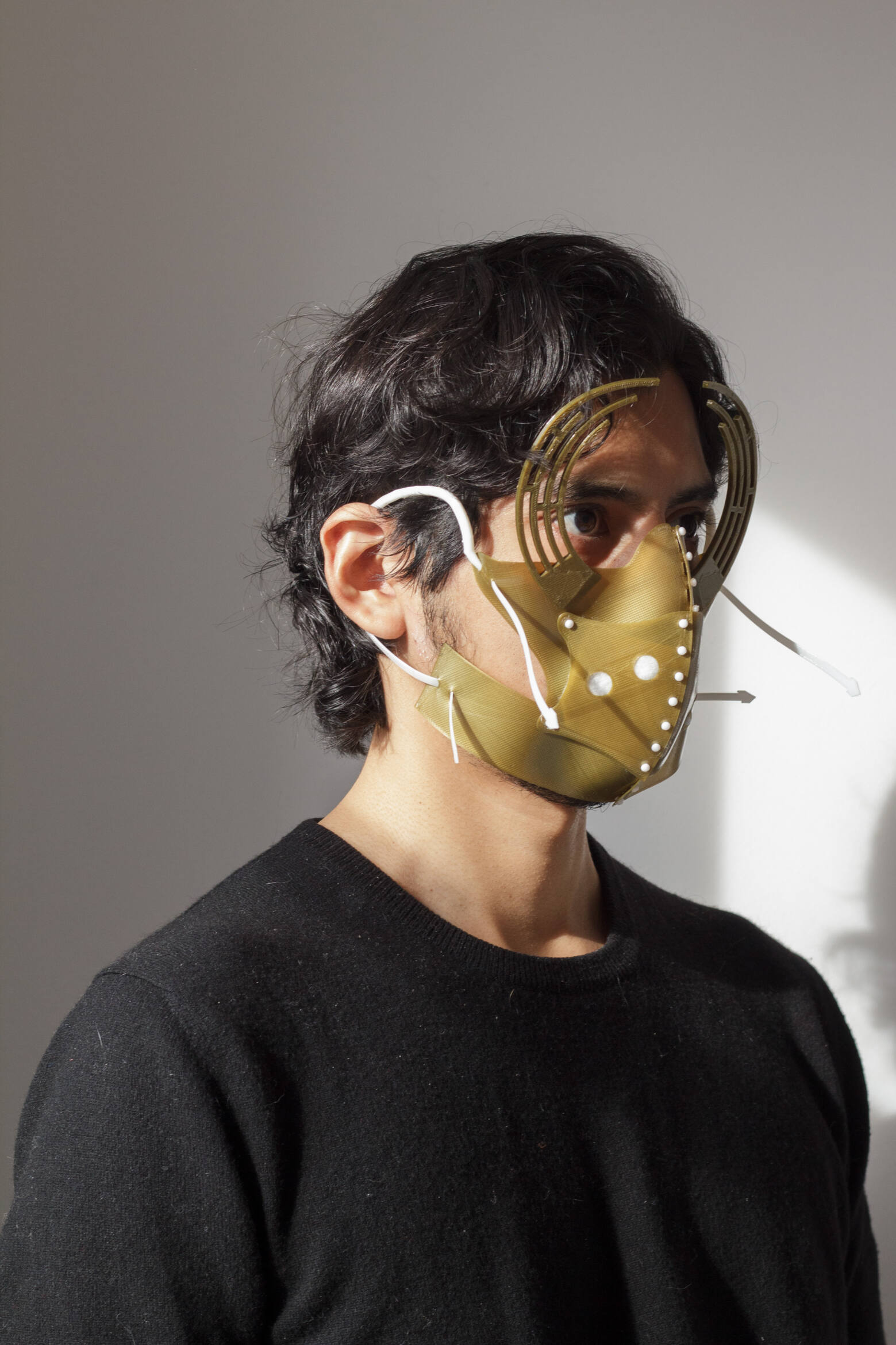 The special edition of the lookbook comes with a 3D printed tablet/display and 2 choices of original masks: the Mercurius and the Ivan Efremov.

About Oscar Salguero:
Oscar Salguero is a researcher, designer, and independent book curator based in Brooklyn. In Spring 2021 at the Center for Book Arts, Salguero presented Interspecies Futures [IF], the first survey of contemporary bookworks focused on alternative and fictional human-nonhuman scenarios. Salguero is the founder of the Antilibrary, a project that identifies unconventional trends and predicts future attitudes via the study of independent artists’ books. More than a library, it is an experiment in cultural pattern recognition and culture alteration. Some subjects of interest include: hyperintelligences, quantum computing, bioart, olfactive futures, etc. The Antilibrary believes the book remains the most advanced information technology devised for humans.
Future Based2022-12-01T12:43:54+01:00
Page load link
We use cookies and sometimes third party services such as Facebook adds. But since we never have analyzed anything, we have forgotten the password for Google adds, and it might even be that the codes are not installed in the correct way (still have to check), you don't have to worry we are tracking you. We don't even know how. However, just to be sure: this website uses cookies up to 14 days (instead of 30). Ok
Go to Top